Would you Add Ube (Bush pear) to your diet? 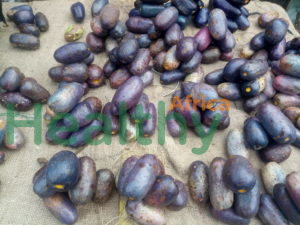 The Bush pear or African pear (Dacryodes edulis) goes by the local name ‘Ube’ in Nigeria. The purple-coloured fruit, however, has many other names such as the bush butter tree, Atanga (Gabon) and Butter fruit.

Unlike other kinds of pear such as Avocado pear, the taste of the bush pear is quite unique and it is not valued by everyone. Though it may not be widely eaten in Nigeria, it is mostly cherished by the people from the South-east. (it is sometimes called Ibo pear locally). 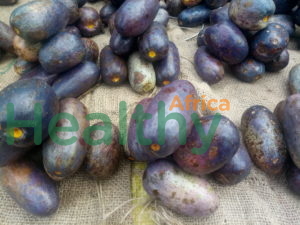 There are other vitamins and minerals contained in Ube in very small quantities  such as zinc, manganese but I highlighted the ones that appear to stand out. All these minerals and vitamins go a long way in maintain your body, preventing damage from oxidative stress as well as diseases.

The fruit is usually eaten raw, cooked or roasted. Some traditions involve softening the Ube with hot ashes but it can also be softened with hot water or a hot plate. It can be eaten with boiled or roasted corn.

The tree as a whole is regarded as a medicinal one and the leaves, stem, bark and other parts of the tree have been used traditionally in the treatment of so many ailments. Some of them include Malaria, beriberi, ulcer, ear troubles, stomach disorders, digestive discomfort, insomnia, cough and many others.

Ube can provide you with lots of good nutrients like fibre, fat, potassium, vitamin C, Vitamin A to mention a few. This will, therefore, be a great addition to your diet if you already to not enjoy the fruit. Take this seasonal opportunity to try it if you have not ever tried it or indulge in it if you are a lover of Ube.

The goal remains to inspire you to eat better and live better.

There are a lot of crops in Nigeria that are uncultivated and are harvested from the wild that would remain unpopular. Many of these...
Read more
Indigenous Foods

African Yam Beans – African indigenous crop Have you ever heard of the African Yambeans? It is a fascinating crop because it produces beans as...
Read more
Blog

A lot of the fish we eat in West Africa are imported. Nigeria spends as much as $170 million on fish importation. We import...
Read more
Everyday Nutrition

Recently, I consciously increased the amount of leafy vegetables consumed in my household. One of the vegetables I focused on the Ewedu (Jew’s Mallow)....
Read more
- Advertisement -