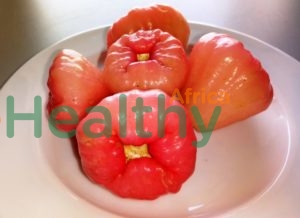 Do you recognize this fruit? The common name in Nigeria is the Nigerian apple but its real name is the Rose Apple fruit. There are many varieties of the Rose Apple such as the Malay rose apple also called the Mountain apple, water rose apple and a ton of others.

The Rose Apple fruit, Syzygium jambos (syn. Eugenia jambos), is one that grows well in the tropics and near-tropical climates. It is a member of the Myrtaceae family which includes the guava, clove, pitanga (Surinam cherry) to mention a few.

While the Rose Apple fruit resembles a rose, it does not look like an apple nor taste like it. It is also called plum rose (or rose plum) in the English-speaking west indies, Yambo in the Philipines, Jaman in India, Jambo amarelo or jambeiro in Brazil. 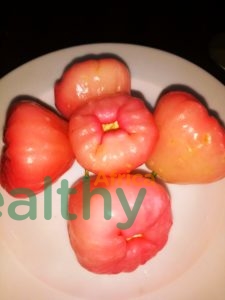 The yellow to red-coloured fruit which is bell-shaped has a waxy look also has a mild taste and a crisp watery texture similar to the watermelon. Its gentle flavour can also be easily overpowered when paired with a fruit of stronger flavour.

Although you find this tree in Nigeria and many other tropical areas, it is native to the Malaysia and East Indies and it is cultivated in many parts of India. It also grows wildly in Guatemala, Honduras, Panamas, Puerto Rico and the Virgin Islands.

The Rose Apple is often not considered a valuable one and it rarely marketed; mostly eaten by children in the tropics.

Rose apples can be served as desserts and sometimes stewed. It has also been used to make jam or jelly and also made into syrup for sauce or to flavour drinks.

Traditionally, Rose apple trees have some cultural value as medicine. The fruits and the bark of the roots have been used as blood coolant and the fruit as a diuretic and tonic for brain and liver health.

The Rose Apple is a delicious fruit that can be enjoyed without inhibition, a note of warning though is a report which mentioned that the seeds are said to be poisonous. So, if you have the opportunity to eat the fruits, please stay clear of consuming the seeds. 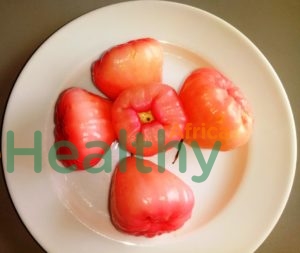 If you come across the rose apple fruit, do not hesitate to try some since its in season. It adds some diversity to your meals and it supplies you with some micronutrients as mentioned above. All in all, don’t forget to eat better and live better.

Share
Facebook
Twitter
WhatsApp
Email
Linkedin
Telegram
Previous articleWhat is Semolina made from? Is it Nutritious?
Next articleWhat Is The Best Way To Eat Your Groundnuts?
- Advertisement -

There are a lot of crops in Nigeria that are uncultivated and are harvested from the wild that would remain unpopular. Many of these...
Read more
Indigenous Foods

African Yam Beans – African indigenous crop Have you ever heard of the African Yambeans? It is a fascinating crop because it produces beans as...
Read more
Blog

A lot of the fish we eat in West Africa are imported. Nigeria spends as much as $170 million on fish importation. We import...
Read more
Everyday Nutrition

Recently, I consciously increased the amount of leafy vegetables consumed in my household. One of the vegetables I focused on the Ewedu (Jew’s Mallow)....
Read more
- Advertisement -